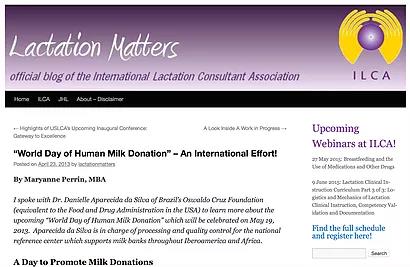 Since 2004, Brazil’s Human Milk Bank network (Bancos de Leite Humano or BLH-BR) has held an annual “National Day of Human Milk Donation” to promote the importance of giving milk. This campaign involves selecting a “godmother of donation” who is usually an actress, singer, or other public figure (a few years ago it was volleyball players on the Olympic team) to bring awareness regarding the importance of donating milk to save the lives of thousands of premature babies.

In 2010, Brazil began discussions with their partner countries in the Iberoamerican Program of Human Milk Banks (IberBLH) about hosting a “World Day of Human Milk Donation” which is celebrated on May 19 by Brazil and 23 other countries. This date was chosen because it is the date of the signing of the “First Letter of Brasilia,” a document to form international cooperation in milk banking.