Why breastfed babies are so smart 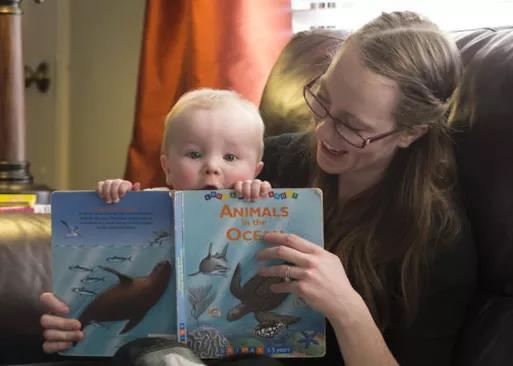 Research has shown that children who were breastfed score higher on IQ tests and perform better in school, but the reason why remained unclear. Now a new study shows that two parenting skills deserve the credit. Responsiveness to children’s emotional cues boosts kids’ math and reading skills. Reading to children as early as 9 months of age also significantly improves school readiness. These two skills can give kids an extra 2-3 months’ worth of brain development.

Two parenting skills form the real source of cognitive boost in breastfed babies: Responding to children’s emotional cues and reading to children starting at 9 months of age. Breastfeeding mothers tend to do both of these things.

Loads of studies over the years have shown that children who were breastfed score higher on IQ tests and perform better in school, but the reason why remained unclear.

Is it the mother-baby bonding time, something in the milk itself or some unseen attribute of mothers who breastfeed their babies?​

Now a new study by sociologists at Brigham Young University pinpoints two parenting skills as the real source of this cognitive boost: Responding to children’s emotional cues and reading to children starting at 9 months of age. Breastfeeding mothers tend to do both of those things, said lead study author Ben Gibbs.

“It’s really the parenting that makes the difference,” said Gibbs. “Breastfeeding matters in others ways, but this actually gives us a better mechanism and can shape our confidence about interventions that promote school readiness.”

Gibbs authored the study with fellow BYU professor Renata Forste for the March issue of The Journal of Pediatrics. According to their analysis, improvements in sensitivity to emotional cues and time reading to children could yield 2-3 months’ worth of brain development by age 4 (as measured by math and reading readiness assessments).”Because these are four-year-olds, a month or two represents a non-trivial chunk of time,” Gibbs said. “And if a child is on the edge of needing special education, even a small boost across some eligibility line could shape a child’s educational trajectory.”

The BYU scholars utilized a national data set that followed 7,500 mothers and their children from birth to five years of age. The data set is rich with information on the home environment, including how early and how often parents read to their kids. Additionally, each of the mothers in the study also participated in video-taped activities with their children. As the child tried to complete a challenging task, the mother’s supportiveness and sensitivity to their child’s emotional cues were measured.

The study gained editorial praise from child development expert Sandra Jacobson of Wayne State University School of Medicine. She noted that children in the study who were breastfed for 6 months or longer performed the best on reading assessments because they also “experienced the most optimal parenting practices.

“Gibbs and Forste found that reading to an infant every day as early as age 9 months and sensitivity to the child’s cues during social interactions, rather than breastfeeding per se, were significant predictors of reading readiness at age 4 years,” wrote Jacobson.

The BYU researchers note that the most at-risk children are also the least likely to receive the optimal parenting in early childhood. Single moms in the labor force, for example, don’t have the same luxuries when it comes to breastfeeding and quality time with the children. Parents with less education don’t necessarily hear about research-based parenting practices, either.

“This is the luxury of the advantaged,” Forste said. “It makes it harder to think about how we promote environments for disadvantaged homes. These things can be learned and they really matter. And being sensitive to kids and reading to kids doesn’t have to be done just by the mother.”